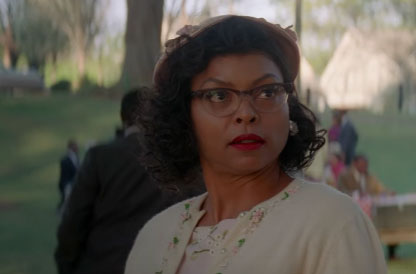 John Glenn went down in history as the first American to orbit the Earth, but the story of the women who made his landmark journey possible has previously gone untold. The first trailer for the biopic Hidden Figures shines a spotlight on the pioneering black women who joined NASA to calculate the journey to space and made a few giant leaps for equality along the way.

The trailer introduces a trio of young women of color who defied prejudice and doubt to give America the edge in the space race. “I need a mathematician who can look beyond the numbers,” says space program head Al Harrison (Kevin Costner). “Math that doesn’t yet exist.”

NASA called Katherine Johnson (Taraji P. Henson), a mathematics prodigy with a gift for noticing patterns since her days as a child identifying polygons on her stained-glass windows. She’s joined by the take-no-shit Dorothy Vaughan (Octavia Spencer) and the driven, flirtatious Mary Jackson (funk queen Janelle Monae in her film debut) in her mission.

The trailer shows Katherine’s budding romance with Col. Jim Johnson (Mahershala Ali) as well as the strain her breakthroughs put on her family. But for the most part, the clip focuses on the barriers these women had to break to be taken seriously.

“We go from being our fathers’ daughters to our husbands’ wives to our babies’ mothers,” Mary laments. “Every time we get a chance to get ahead, they move the finish line.” Facing racism from NASA’s white employees and sexism from black men, the women pushed forward through sheer brainpower and hard work. As Katherine so bitingly puts it, “It’s not because we wear skirts. It’s because we wear glasses.”

Directed by Theodore Melfi (the man behind the recent Bill Murray vehicle St. Vincent) with original music from Pharrell Williams, Hidden Figures also stars Kirsten Dunst, The Big Bang Theory‘s Jim Parsons, and Glen Powell of this past spring’s Everybody Wants Some!!. The film is set for release on January 13th.